You are here: Home / Gears / How To Choose A Two-Way Radio

How to choose a two-way radio?

For hikers and off-the-grid explorers, two-way radios are essential equipment. They allow quick and uninterrupted communication with other people who are currently situated in other areas.

Since we are talking about outdoor applications, it is necessary that the radios should be durable, rugged, and compact. But of course, they aren’t the only features that you need to consider. If you want a high-quality two-way radio, the following features should be taken into account.

The best way to know these two-way radios is by understanding their anatomy. Fundamentally, you need to have a grasp on how they operate and the things that make them function the way they do.

Below are some of the essential features of two-way radios. Be familiar with them so that you will be able to refine your choices. In this way, you can narrow your selection and get the two-way radio that suits your needs and budget well.

Essential Features Of A Two-Way Radio

For those who are winter hiking and skiing, make sure that the radio has an ergonomic, slip-free architecture. In this way, you can hold it even while wearing gloves.

In a general setup, you can communicate to a person using a channel. For example, you talk to your friend via channel 6. With the privacy codes, you can have an isolated line in the said channel. An example would be talking to a friend on channel six and code 7. Through the CDCSS and CTCSS, radios can reduce the unwanted traffic off the channels. With the codes, your reception would be free from unwanted noises.

Keep in mind that a privacy code doesn’t necessarily encrypt your communication. It is still public but has been isolated. That’s why other radio manufacturers refer to these codes as interference eliminators.

Radios that are exclusively FRS have a maximum output of half a watt on average. Their range usually extends from five to six miles. While it is true that GMRS models are capable of high outputs (as high as 50 watts), most of their recreational counterparts only offer one or two watts of output. In this way, their weight and bulk would be reduced. Their range can extend up to 25 miles, and the optimal range is 8 miles.

There’s a benefit if you choose these high-output radios. They can compensate for the dropouts, especially if you are surrounded by tall buildings or hills. As long as the radio is powerful, the signal that it generates remains strong. But at the same time, keep in mind that a high-output radio also eats a lot of power. Moreover, they are expensive to purchase.

Other Factors In Choosing Two-Way Radios

As you can see, it is not that difficult to learn how to choose a two-way radio. You simply have to know all the distinct features of these radios so that you can refine your selection based on your needs and personal preferences.

In a nutshell, two-way radios for outdoor applications should be lightweight and compact. They should also be rugged and offer hands-free mechanisms, if possible. Also, check if the radio you get requires a license to operate or not!

That’s it for now. If you have other related inquiries, feel free to ask me in the comment section below. 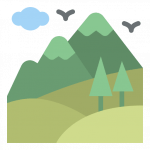